Hello! In the three days since coming back from visiting my family (actually, it ‘feels’ like I’ve been back longer…the more we visit, the greater the missing upon our return.  Must be some kind of mathematical equation that accounts for that; then again, where matters of the heart come into play, logic isn’t always…logical), I’ve managed to accomplish *some* card-making and some visiting-and-commenting. I’m still behind in all areas, so apologies if I haven’t been by recently; I’ll be lacing up my running shoes and setting a pace to catch-up asap!

Time with my niece and nephew is becoming more precious and more hilarious!  We spend Saturday afternoon/early evening at West Edmonton Mall, specifically in Galaxyland, which is an indoor amusement park.  My niece certainly enjoys the thrills of rides (she is reasonable about her selections…thank heavens), while my nephew was content to pretend he was ‘driving’ the cart my brother had him corralled in. Whoever decided to add steering wheels to such vehicles: brilliant!  We rode the carousel, the train, a mini-ferris wheel, the carousel again, and on her own, my niece “piloted” a small plane on a ride that was far too twirly for me to even watch.  By the time we left, we had two tuckered out parents, one tuckered  out Aunty C, and two little ones who still had ‘some’ energy to burn.  Great fun had by all!

On Sunday, before heading home , my mom and I headed over to visit the kids.  My niece loves, loves and loves hearing ‘stories’ (well…’tall tales’ might be more appropriate) about my husband’s bike racing excursions. This weekend, I told her about how I hand him water bottles in the feed zone during certain races (those in Bend, primarily…I LOVE Bend…).  If you could see her face when I explain the details – the intense concentration, the ‘big eyes’ fascination – you’d have a smile all over your face (Anita, from France , I soooo  love that phrase!).  Of course, one telling isn’t enough…three isn’t enough…and sometimes six isn’t enough.  Her “Aunty C, please, please , please tell me about Andy’s bike racing and the water bottles again,’ is just too sweet to resist.  Eventually, I can divert her to attention to other things, but she most certainly gets a kick out of her Uncle Andy escapades…and another ‘highlight’ emerged.   My nephew and I were playing ‘hockey’, which completely enthralls him (true Canadian!), using plastic drumsticks as hockey sticks and a soft ball as the puck.  Not exactly an easy feat to smack the ball with ‘skinny’, no blade sticks, however, part of the fun is trying….and chasing the ball wherever it goes.   While the ‘hockey’ game was going on, my niece was running around the kitchen island, near to our ‘arena’.  Each time she came past, me, I was passing her (or taking from her) her water bottle because – yes, you guessed it – she was in a bike race!   You can picture me bent over, whacking a ball – or the air, more like it - with a drumstick with my left  hand, and holding out a water bottle (sippy cups…great inventions, too!), for Ms. Tour de France bike racer each time she passed.   Hilarious…oh, how I love those two!!

Anyway, I’ve more Valentine *cards* to share, as part of the 51 total I’ve been asked to create.  I still have about 30 more kid ones to figure out, as well as 15 for the education leaders.  It's this latter groups’ cards I worked on over the past couple of days (Mr. Mojo is still wandering..sighhhh).   I have, in my stash, a number of 12 X 12 sheets of patterned paper, accumulated before I figured out that big patterns don’t translate well onto cards (sometimes they do, but you know what I mean).  So, influenced by others in this wonderful community of ours to “use what I have” (Amy T’s decision to use her wood-mounted stamps more often is what triggered my idea),  I took out the few sheets of Valentine-themed papers and transformed them into 6 mini envelopes, which will eventually house a chocolate-y treat of some nature.   Yes, they’re a ‘bit’ busy, but I figure that’s okay…Valentine cards “from” kids are allowed to be busy (Mr. Mojo needs to get back, because I’m starting to feel like I *am* crafting like a kid…eeek!).

My first card is heading to STAMPlorations Challenge #4 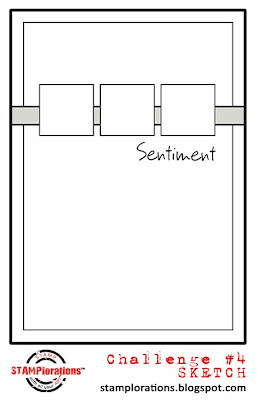 and will also be joining the others over at CAS on Sunday's #25: Lovey Dovey challenge, as well as a new-to-me challenge, Simply Create, Too #53: Use Hearts.

Be prepared...these are busy...but they're fairly easy...dies cut-and-paste and stamp (it's all the dithering around I do that winds up taking me longer than it should.  Must. Focus *grin*) 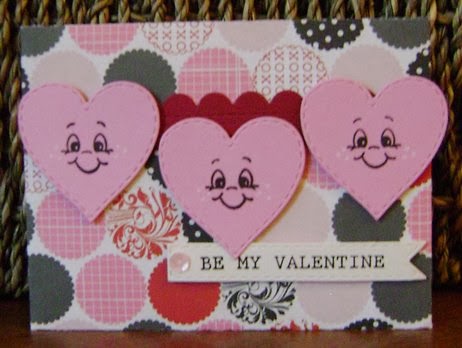 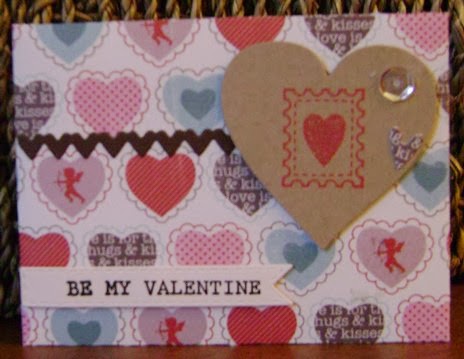 I was inspired by the current Seize the Sketch #12 challenge for this one, but I'm not entering it.

Let's do the tally:  15 kids' cards done and 6 teachers, which means still another 30 to go.
Wonder what will pop into my imagination next.  Lovin' this!!!

Love the hearts and the use of the sketch. Thanks so much for playing along at STAMPlorations xx

Love when you share your times with your niece and nephew....you're a fabulous Aunty.

yahoooo for using what you have...those valentine's are incredibly SWEET.

Glad to hear you had a good time with your family! Your valentines today are fun - I don't think the patterns are too big - you made them work just perfectly! I especially like the polka dots with the "lacy" doily edged heart on top!

Hi, Caro: Your cards are ALL so very pretty. Glad you entered the Simply Create Too "Valentine's Day or Hearts" Challenge #53.
Please come back this tomorrow for our new challenge #54.

I am over the moon happy that you had such a truly enchanting visit with the sweet little ones! Talk about splashing a smile all over my face - the vision of you playing hockey with a drum stick in one hand, and water bottle...um, I mean sippy cup in the other still has me giggling away!! Exhausting, yes, but best times ever - YES, YES, YES!!
Okay, so these Valentines: ADORABLE!! Not too busy at all - the kids will LOVE them (just like I do!). Just so clever too to make use of your 12x12 papers for sweet little envies. Love the sparkle and shine, and awwww, those smiley faces on the hearts are perfect! Love everything!!!
So glad to have you back...missed your posts since you'd been gone :) !!!

Carol...I hope you realize how much I enjoy reading your posts! I can totally picture you playing 'air' hockey with a drumstick....a rather hit and miss affair!

Do you realize how excited the kids will be to hand out cards made specially by Aunty C? The DP patterns and colors are awesome...dots & hearts - not one bit busy!

I don't know how you do it??!!! Just lots of craftiness over here Carol, and super sweetness as you do it!! And you always tell me what a great Auntie, I am , well you are too and smooches back at ya!!

Life through the eyes of a child is such a precious thing to experience :) Precious moments indeed!! We hang in the Wave Pool at West Ed Mall - that place is just too fun!! I usually outlast everyone so guess who the big kid is LOL! LOVE the cyclng/hockey playing story - you are very talented being able to multitask like that ;) Well done on the cards and glad you are closer to the finish line there. Have a great w/e.

I'm exhausted just reading about those kids! Love all those cheery Valentines (51!!!??). Thanks for joining us at STAMPloraitons!

Aren't children the best! I think the thing I love best about reading your tales with them is that you can just hear the love you have for them, and they for you, with each sentence. It is precious!

Your cards are lovely! I know what you mean about the big patterns not always translating to cards but I think they have worked really well here! You always inspire me to want to create. Can I come over and play? lol

wow...you are just one busy bee, or should I say a card making machine. So many sweet and adorable Valentine's Day cards. I know all those children will be over the moon with what you have made.

Oh look at all the lovely little hearts everywhere! Your cards are so wonderful! I know there are going to be some happy little kiddos when they receive a handmade Valentine! So happy to hear you had such fun with your family! Sorry I got so behind on my commenting. Sometimes life just gets in the way ;)

Aww...Carol, so..so..so glad you had a Fabulous time with your family :) Its always a treat to visit you here. Oh,,,you projects are wonderful...they are Perfect those happy faces and polka dots sure will make any face happy. Oh and Thank you for your super sweet comment on my blog...you sure know how to make a girl smile. Enjoy you day...Hugs <3

Your Valentine only diet is working! These are just great, Carol! I was picturing your playtime with the little ones & laughing--I know you treasure these moments & know how lucky you are. Wouldn't it have been neat to have a video?!