Hello...how did it come to be Thursday already, not to mention the eve of the last day of February? 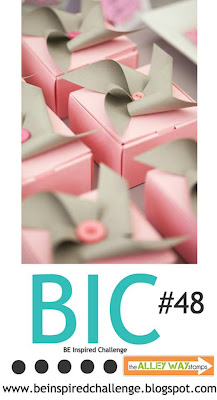 As you'll see, my cards are *really* basic, focusing on the colours, combined with inspiration drawn from the eye-catching, yet simple designs found on the current Just Us Girls Challenge #229: 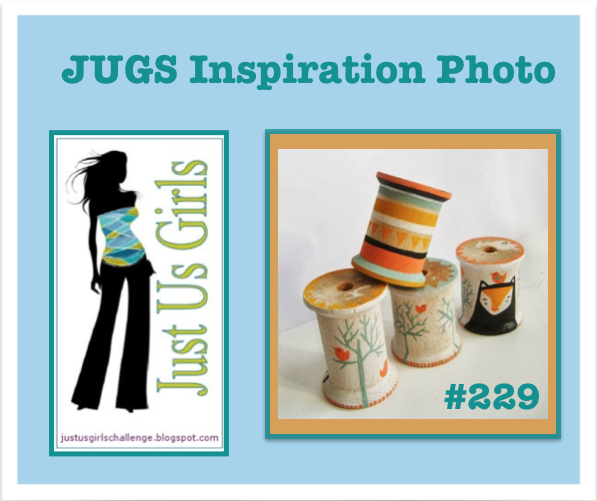 really caught my attention, so my second card is a 'sort of' reflection of her interpretation.  To the wonderful JUGS ladies:  hope it's okay my tree is grey and bird pink.  If not, let me know and I'll take 'er away.

Here's my take...hoping that those pink blossoms of spring will be making an appearance soon!

Sigh... photographing is pa-thet-ic...they really are much more vibrant for reals...

Once again, I was hesitant about adding my cards - they're simple (yet took me ages to make, as is par for the course), and I really wanted to create something more 'pinwheel' like.  Alas, no such stamps of that ilk are in my collection.  HOWEVER, I do have 'pinwheel creation' as part of my crafting repertoire, so if you have a moment, I'll tell you a wee tale...

My dad and sister-in-law share the same April birthday, so two years ago - which upon reflection, was my 'first step' into the world of crafting - I tried to figure out something that my niece and I could 'sort of'create together as a combined birthday gift; something a 'little girl' would like to share.  A bunch of thinking and searching later, I found instructions for some pinwheels; instructions that, as I quickly learned, were well beyond my capabilities (hint: eyelets required - and I didn't have an eyelet clamper-on-er thing, so the hammer had to come out.  Dowels to be sawed to size...oh, the production).  I also decided, given the labour intensity (for me, anyway), that two pinwheels might as well become more, so the grand total was six or seven.

I prepared all the pieces, then took them to my brother and sister-in-laws to assemble with "high hopes" that Ms. Niece would help out.  She did (she was 2 at the time) kind of - mainly playing with glue, and not necessarily applying it to pinwheel construction.  My #1 helper turned out to be my brother; he tackled the assembly like nobody's business, and in fairly short order, we had pinwheels ready for my niece to hand out at the birthday supper. Even now, two years later, my sister-in-law has her vase of 'wheels on the kitchen island, and the kids play with them often.

Here's a couple of photos....still can't believe *I* made them...with handy-man brother's help...(I should make more - with paper that's patterned on both sides.  Clueless at the time - and little did I know this would be the 'gateway' to my pp 'addiction'...) 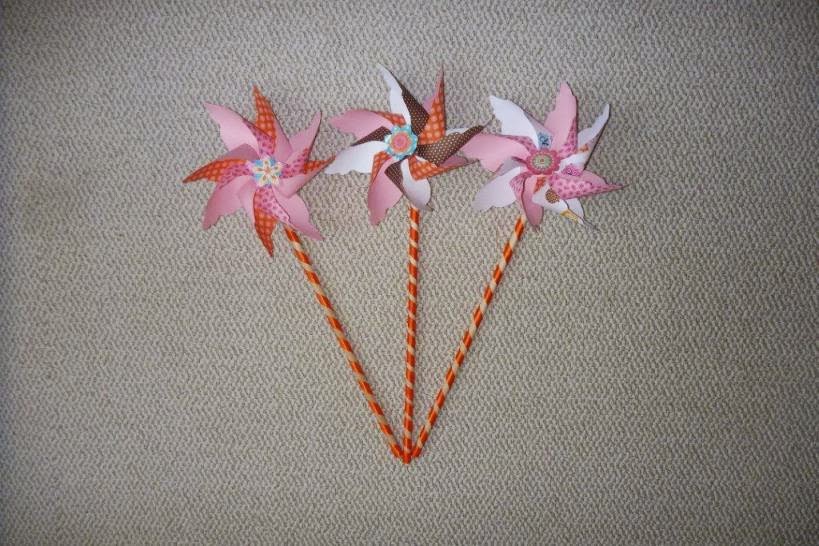 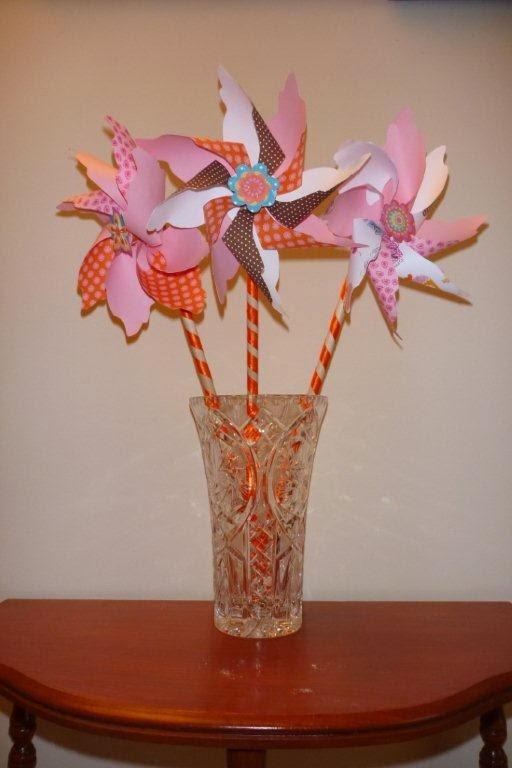 Okay, first of all, the cards...OMG, I think they have moved up to #1 fave!!! Squeal!!! Wait, what...you weren't even sure if you were going to post these?!! Time for a visit to the optometrist because you must be having problems with your vision...um, these are AMAZING!!! Perfect colours, soft and pretty - and would you look at that shading on the bird?!! Ack!! FABULOUS! Total winner!!! And as if those didn't blow my mind enough, those pinwheels...my jaw just DROPPED!! Those are beautiful! No wonder your SIL has had them on display ever since!! All that effort (and that was a lot!) to make these happen - SO worth it!! LOVE, LOVE, LOVE!!!

Awwww, thanks for the shout out :) Your cards are adorable, and since it is an inspiration photo, no worries. Anything on it can inspire you from the colours the elements etc. So they are spot on! Love that cute bird in the tree - lots of them showing up here recently with spring approaching - including one VERY noisy woodpecker (the BIG woody woodpecker types with the red head) who has claimed our exhaust pipe on the roof to use as his territory marker LOL! Scared us silly the first time we heard the brrrrrrttttt sound as we thought it was the furnace or something but soon figured it out. He has come back for the past eight years or so and last year we saw the babies - so stinkin' cute!! Love the pinwheels!! Remember making these with straws for my kids - not nearly the high end variety you made LOL! You are great aunty - no wonder the kids fight over you :)

I love your CAS take on the challenge and on Marisa's card. Great job! Thanks for joining us at Just Us Girls!

Inspiration comes in many forms....your cards are great! Thanks for joining us at Just Us Girls!

These are so sweet, Carol ... you've captured the inspiration photo brilliantly in the lovely colours! Great pinwheel story ... although I would say these amazing whirlie-gigs look way more complicated and engineered than your common or garden wee pinwheel! Hugs, Anita :)

Who'da thunk that a few little pinwheels would be be the start of this fabulous crafting journey that you are embracing so exuberantly!

Awesome cards - I LOVE the simplicity of the design and your images! So let's think about a pinwheel...one piece of paper with the corners folded in....simple....so a great interpretation of the inspiration photo!

BTW - those are some mighty fine looking pinwheels!!!

cards and pinwheels...it's a party! Love everything! Your cards are so very sweet!

Your cards are adorable and the inspiration photo is there to take you where your ideas flow! And the pinwheels are so fun! Thanks for playing with Just Us Girls!

Wonderful note cards, Carol. Those pinwheels are beautiful & you can just add them to a card--with or without a stick. Glad you reminded me--think it's time I made another one.

OOh my goodness, your cards are adorable! I LOVE them. I love the soft colours and the design of them both. They are stunning!! Speaking of stunning - yep, those pinwheels!! Gorgeous!

Cuuute cards, nothing wrong with simple, those are usually the best too!! And the pinwheels!! Oh soooo cute!!

Hey sweetie I love your cards so so cute and great colours, love the pin wheels too, reminds me of my son when he was little he loved them but couldn't blow them, I spent about half an hour making him giggle and almost passed out from blowing them :0) hugs Pops x

Wow...wow...wow! You are simply amazing my sweet friend. I love those adorable pinwheels, so fun and very festive too. Such a sweet story and think all this started with a few pinwheels...I love it! Now on to your cards, they are amazing and look it too. Not sure why you would think they were anything but fabulous, because they are just that!