“Pouty” – my attitude for a chunk of yesterday.   Given my age, poutiness shouldn’t even be a selection on the ‘mood-o-meter’ but that arrow was bang on, and seemingly not about to waver, even a little bit.  The reason for my ‘sads’ – niece-withdrawal.  Full force episode!  We spent a most awesome weekend visiting my family, and amongst the many highlights, the most highlight of all was time with my niece.  She was at my parents when we arrived and a greeting that involved a running, arms-outstretched, almost-bowl-me- over hugging three year old, exclaiming at high volume “Aunty C, Aunty C” made my heart sing!   After not seeing her for nearly 7 weeks, we picked up with where we left off:  giving the toddler-sized cloth doll my mom made a ‘bath’ (pretend, of course);  heading off to the moon in the rocket ship made out of a giant set of tinker-toy like structures (her, comfortably seated in the rocket’s ‘shell,’ me not so much – but since I was ‘buckled in’ she assured my I’d be fine, even if my legs stuck out);  being her ‘get in trouble a bit with daddy’ accomplice when we decided that putting a strawberry in her milk was kind of an interesting taste experience; and carrying her (she’s getting so big, but I’ll carry her for as long as I can, and as long as she’ll let me…weight-training time for Aunty C!!) out to the van when it was time to go home, assuring her that yes, we’d spend the next day together.
And so we did…the WHOLE day!  We shopped at Costco, where the gigantic stuffed pandas – all 6 of them – had to have hugs and tummy tickles; we made tiny cards using my MFT butterfly die (way too much fun – although the glue-stick became a distraction…a lot of gluing going on); she iced the birthday cake with my mom (sugar-rush ensued – a lot of icing tasting going on!); we went for a walk, and got caught in a rain squall (more carrying her going on…); we played ‘fort’ (a lot of ‘pretend’ going on…especially when we went to the ‘zoo’ and rode the elephant…and ponies…and giraffe);  we celebrated her mom’s and my dad’s  (Poppa’s) birthday with great gusto.  Because her little brother was sick, and ended up staying home with my sister-in-law’s parents (invited, and very much missed at supper), she truly was the center of attention.  You can only imagine the scene that unfolded when, in response to my brother-in-law commenting on her recent ride on a ‘school bus’ (a daycare field trip), we were all ‘invited’ to sing, and of course, ‘actively participate in,’ several rousing verses of “The wheels of the bus go round and round…”.  My mom and I nearly hit the floor laughing when one of the verses involved her brother who, on the bus, ‘goes wah, wah, wah…”  Yes indeed, one of the bestest, most wonderfulest days ever!
On Sunday, mom and I headed over to my brother and sister-in-law’s place, and while the two of them had a much needed, much deserved nap, we spent time with the kids.  Poor nephew still wasn’t feeling great, but a cuddle-on-Bacia sleep helped.  I, in turn, received lessons about Care Bears, from my niece’s obvious expertise on the adorable critters.  Hugs goodbye on Sunday, when we departed home,  weren’t nearly as ‘okay,’ as those on Friday and Saturday.  Not even close.
So, that’s the tale behind my ‘poutiness’ yesterday.  Combine that with a snowy day (ummm, Spring?  Hello, Spring?? Are you there??), and you can imagine my mood (Grumpy Care Bear comes to mind – I was feeling blue!).
Thankfully, though, I found silver linings to lift my spirits.  Comments and notes from some wonderful card-making friends (thank you so much!!) and the Online His and Hers Card Class started!!!  Day One was amazing!   In the span of a few videos and the accompanying ‘visuals’ of some stunning cards, my gloom shifted and some rays of ‘light and delight’ emerged.   I learned ways to transform the ‘same’ sketch, stamps and sentiments into both male and female cards; I learned more about ‘masking’ (next step is “try this”), and I even had an ‘assignment’ to do.   “Pouty” was set aside (for a while, at least), and I immersed myself in some day-brightening happy-making challenges!
For my cards, I opted to use the same stamp set: Wish Big, from TAWS (debuting day!!), and create masculine and feminine birthday cards.  In addition to sharing this with my ‘classmates,’ I’m entering them into the following challenges:
My masculine birthday card is heading to CASE Study Challenge, where I took inspiration from the colours and sense of ‘flight’ from the card presented.  I made an ‘oops’ though, by adding glitter in a couple of spots *palm smack on forehead*.  What was I thinking!  Oh well, maybe some guys are okay with a bit of sparkle. 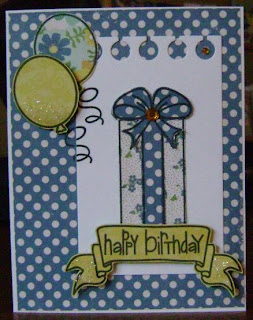 My ‘feminine’ version is for CAS(E) #25.  Even though my card may not be completely “cas” once the idea gelled, the actual making was quite quick.  I’m getting much faster with the fussy-cutting, even though I’m still fussy (I don’t like uneven edges. Sticking point.  But they still happen…more practice J) 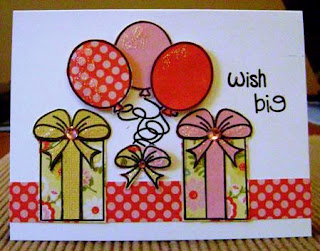 And “just because,” I’ll include both in CAS-ual Fridays #99, where the theme is Birthday Bash.
Posted by cm at 9:07 AM

Wonderful account of time with much loved little one! Sounds superbly fun. Cards are wonderful. A smidge of glitter on a guy's card works fine in my world. These are definitely his and hers! Wonderful job. Great colors. Fun, fun, fun stamps. Love them. Bev
p.s. will em soon

Great job on the class homework, Aunty C! Well done!! It was just the thing to you through your niece withdrawals!!

Love your bright colours and paper piecing! This is very cheery and not pouty at all! lol! Thanks so much for playing along with us at CAS(E) This Sketch this week!

Your niece must absolutely love the dickens out of you! What a cool Aunty. Happy, happy times for both of you! I just wonder who had the most fun?

Amazing cards! No sign of a pout whatsoever! Quite the opposite! Vibrant, beautifully designed and meticulously crafted!

A bit of bling a guy card just adds a little sparkle to their life!

Fabulous card, love the mix of patterns!
Thanks for studying with us on CASE Study!
:)

I just love the LOVE you have for your niece (and the rest of your family)!! It makes for a very happy heart!! Wish I was there to see you ride the elephant a the "zoo"!!!
I am loving, no - LOVING the cards! I'm glad the card making helped you escape just a little from the withdrawl. Your cards only show "happy" - because even though you are a little sad, I know your heart is filled with HAPPY after having the bestest, most wonderfulest day ever!

Both of these creations are absolutely stunning I just love the little extra things you added the glitter etc. the elephant at the zoo sounds amazing I'm so glad you got to spend time with family can't wait to see what you make next hugs

These cards are so fun and bright, love the arrangement of presents and balloons and that touch of glitter :) Thanks for playing this week at CAS(E) this Sketch!

What awesome cards!! I hope you get to see your niece again soon! Thanks so much for playing along with our Birthday Bash at CAS-ual Fridays!