I had plans.  Really.  Before last weekend's trip to see my family, I scoped out upcoming challenges, aiming to be organized, getting a head start on crafting - anything to avoid 'last minute' rushing.  TAWS Be Inspired Challenge #22 was on my radar; a 'must do.'  I knew the likelihood of creating something 'truly unique' would be daunting, given that I'm still (but not for much longer!!) relying on freebies for inspiration, and my stash has dwindled a bit, trending now toward rather muted palettes of patterned paper (another item - or zillion - added to the shopping list).  Bound and determined I was. A few scraps of coloured paper assembled, a freebie selected, some die-cutting and paper piecing and ....ta dahhhh, a card emerged.
And I 'sort of' liked it, but it was sort of 'meh,' as well.
Put simply, the freebie deserved better - far better - then what appeared. It was one of those situations good in theory, but in practice, not so much.  Well, figured I, this would be my 'second choice' card, because, after all, I had time to make another.  Plenty of time.
And then I missed the deadline <hangs head>.
So, my 'contender' card, became my 'only' card; and my 'only' card became my 'missed it by that much' card.  In the grand scheme, I'm okay with that.  As I mentioned, the whimsical paintbrush and sentiment warranted more of a 'stage presence' then what they received.  A card for my brother and sister-in-law's anniversary (more about that in my next post...) was the goal, but...a bit of a stretch, left as it is.
Anyway, I'm sharing my card after all, because...well, because my mom really liked it.  And that makes it all - the 'target close, but not quite, achieved', the missed submission, the 'needs something, but not sure precisely what (perhaps some bling on the top left...) - okay.  My mom liked it just as it is...and I'm 100% grateful she does! 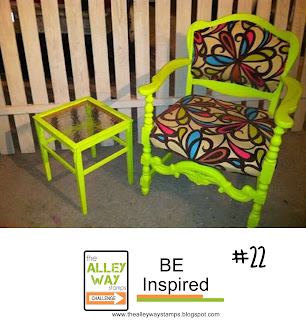 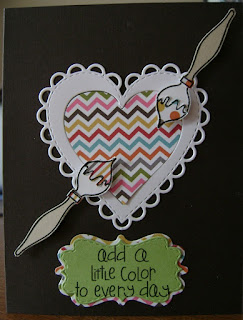 My 'vision' - even though the brushes are 'different,' when they come together, they create a new, pretty, 'love-ly' pattern.  That's what's supposed to happen in a marriage; it's exactly what happens in my brother and sister-in-law's marriage.  Those two, unique and special, add colour to one another's days. Even though we live four hours apart, they add colour to mine, as well.  Love really is pretty, isn't it?

Thanks for stopping by!  I wish you beautiful colours and patterns to delight your days!!

The contender is a CHAMPION!! I don't sort of like it - I LOVE it! Your Mom is bang on! And your vision became reality! I totally "see" it! Love, love, LOVE! I am also in love with the patterned paper you used :) Your brother and sister-in-law are in for a treat! A perfect way to celebrate such a unique and special couple!