Welcome to Day 3 of the Uniko Studio April/May 2019 Release introductions. If you missed Day 1 and 2, you can catch up HERE and HERE.

As if often my 'direction,' I went rainbow with the stencil, pairing it with sentiments from Simply Said.  So. much. fun!! 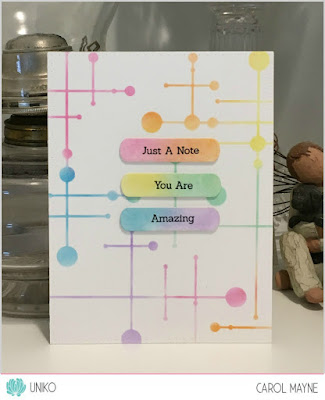 More of this stencil in action on release day!

Warmly inviting you to head to the Uniko Studio blog to see what Bev, our guest designer, Jenny, and the rest of the gals have designed. A whole lot of beauty to behold!

Oh wow, this look amazing! I adore the rainbow and the unique and fun design of this card. Carol, you rocked it!

Very good idea to have used rainbow colours with this stencil. It makes such a happy card. Fabulous!

So pretty Carol! Love the soft pastel colours and the pairing of the stencil with the words just works so brilliantly.

This looks fab Carol, such pretty colours and looks great with just the sentiments xx

The stencil looks wonderful with your rainbow inking, Carol.