Day 2 of our long weekend, as well as the second day of the bike races, the Tour de Bowness, which is a neighbourhood in Calgary and the home of Bow Cycle, the shop that sponsors the event...and where my husband makes a whole, whole, whole, whole and whole lot of his cycling purchases. It's kind of like the "Simon Says" of bike stuff *grin* When he races, he races as a Bow Cycle club dude).

Yesterday's road race was wonderful, mainly because my driver for the group of riders I was following (for 132 km!) was an absolute gem - and his girlfriend is into crafting and scrapbooking! He's incredibly supportive of her hobby, so chatted for nearly the duration of our drive through the countryside, about things crafty-themed. So much fun. As for the cyclists: no issues with my group whatsoever, so everyone was happy...well, except for the 8 or 9 guys who dropped out; some because the pace was high, others because of mechanicals. One had issues with his bike seat/seat post: ouch!

Today's race is a hill climb - not long, but steep - which requires a gruelling effort from 4 minutes to 8, depending on the riders' fitness levels.  To 'ignite' their competitive spirit (which doesn't need much ignition...guys on bikes, wearing numbers and being timed pretty much is all that's needed), they race up in sets of three, with two minute intervals between sets. The first group goes up at 6:00 pm; the last, at 8:02pm.  A short burst of energy from them; a two hours 'burst' of energy for us who are officiating.  My husband isn't one of the commissaires for this event - we have enough - but he is riding his bike the 100km (60 miles, give or take) into Calgary to meet up with me and to see some of the racing.  We'll get home around late-ish, eat supper, sleep and up-'n-at 'er early tomorrow; back to the city (both of us in the car this time *grin*) for 8:00am for the criterium races.  Should be fun...as long as the weather plays nicely!

Before I head out, I'm sharing cards inspired by our wonderful, sweet, fabulous, darling Bev, who is the GD over at MUSE #78,  Check out this charming framee, happy colours, "hello" gem - a guaranteed smile-maker: 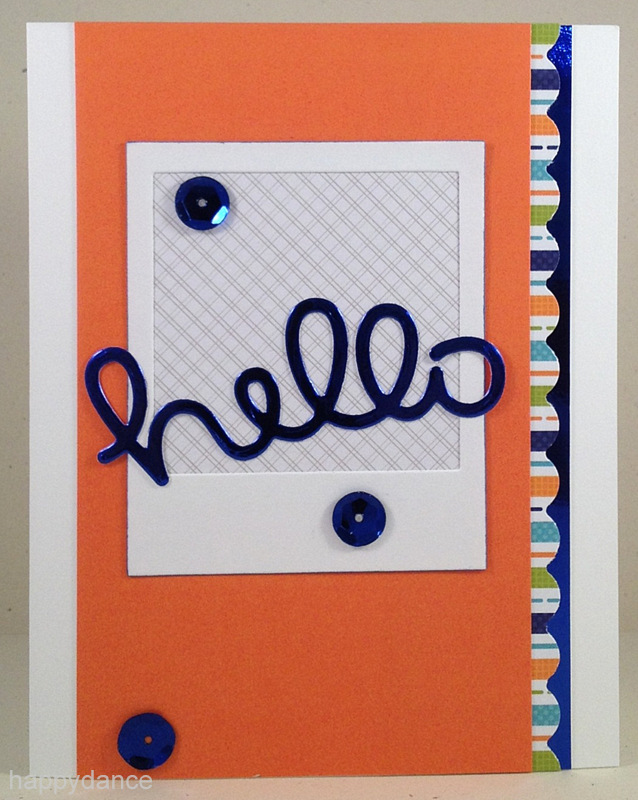 The sparks of inspiration from this card are spot-on-perfect, because it's "Happy Months' Old" time for my niece and nephew - and Aunty C was looking for ideas. Bev to the rescue...woo hoooo!! 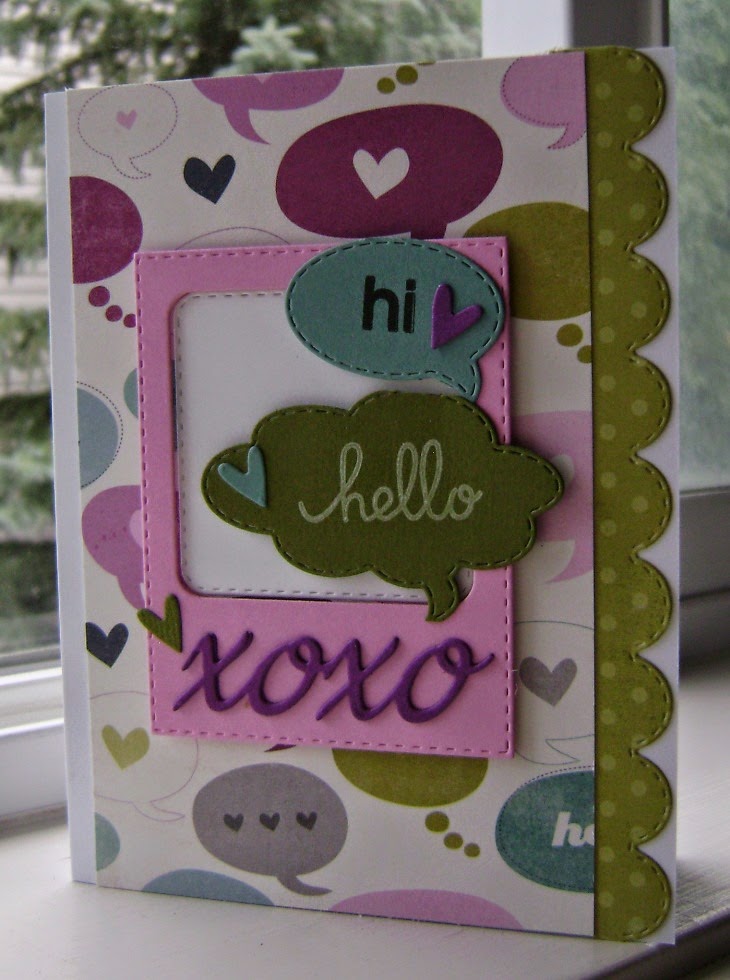 It's a bit busy,  given that I replicated the background paper with a duo of speech bubble dies on the frame, but she'll be fine with it. I'm sure, however, a bunch of why's' will emerge: Why did you pick these colours? Why did you make hi and hello different? Why is your hair all crazy? Yes...she's a curious lass.

Card #2 is for Mr. C, 29 months old, as of the 12th.  He won't have questions, but hopefully, he'll like the helicopters.  If I could find Lighting McQueen or Spiderman paper, now then I'd be Aunty C with 5 star status! I'm on the lookout... 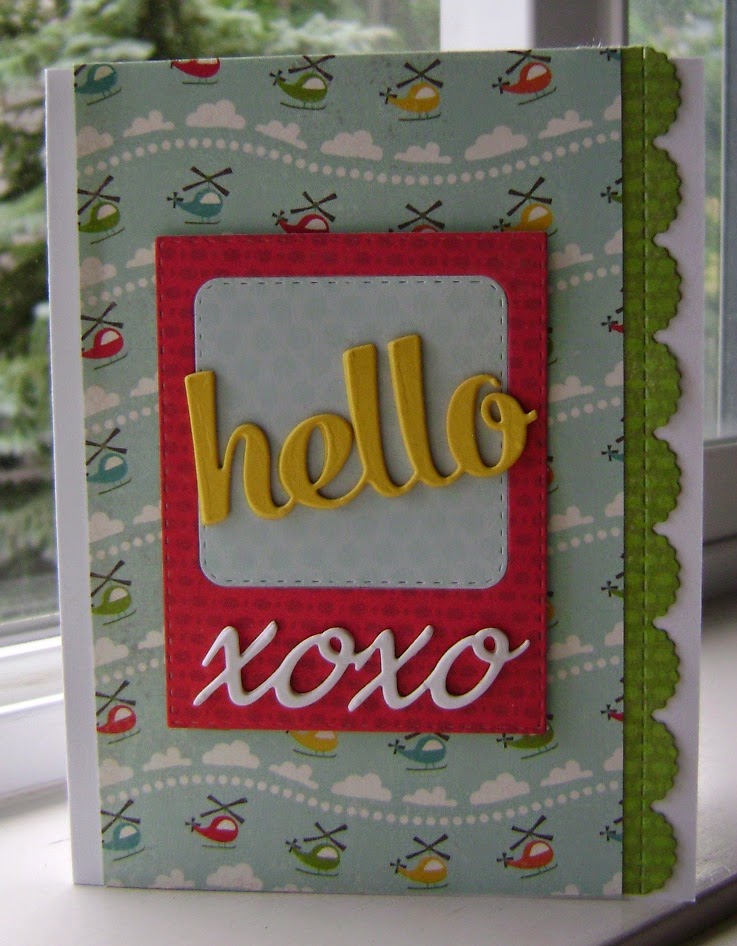 Bev: thanks to you, I have two more cards for the kidlets! MWAH to you for helping me out exponentially!

Thanks so much for dropping by; your visit and comments make my day!!

These are super and show the different personalities of the kids perfectly! So glad you joined us at Muse this week!

Carol, both of your cards are fabulous and fun and I am sure those little sweeties will love them. Your choice of patterned paper is so perfect and so stinkin' cute too. Such a sweet design too, but then all of your cards are amazing.
Sounds like you having a wonderful time at the bike races too and how fun to meet someone how has the same interests as you do. Enjoy the rest of your holiday!

Awwww...shucks. You're so sweet to say such nice things. Now I'm sure you would have come up with these wonderful designs all by yourself. Miss T and Mr. C are going to love these. What little one doesn't like getting happy mail just for them?! Great colors, and love how they're the same, yet different. Great take on the Muse, (hahaha) and I'm soooo glad you played too. What terrific friends I have! Hope the bike races are everything you both hope for. I can 'see' little movies of them in my head when you describe them! TFS! Bev

Wow, the muse kissed you twice! Great cards, both of them! Same layout but so different! Boy, those kids are lucky to be so loved by their Auntie!
Good luck to your husband for tomorrow's race! Is he a professional bike racer? It sure sounds like it...

Two great cards with a wonderful layout that looks different on each one. Wonderful papers and card for your niece and nephew. Can't even begin to ponder how painful a steep hill climb can be on a bike...remember one we had to tackle on our way to school when I was younger and 9/10 we ended up walking our bikes up it.

Love how you used Bev's card for inspiration for your wonderful creations for the littlies. They are going to love them (and if for some realllly peculiar reason they don't, send them my way as I do. lol)

Well done Carol on the littlies cards, love them both. My Grandson would love the second.
My husband wishes he could get out on his bike but his knees protest too much these days. He has just finished his 3 week TDF fix on the TV but he did get to drive part of the route near Sheffield as we headed over to see our Son. :)

Carol, both of your cards are amazing. The first one is my favorite. I love the colors. You did a great job with this challenge.

Fabulous card - love them both !

I do love how you take a prompt & make it into cards! These are wonderful, Carol, & I know the kiddos will adore them!

Loved that Simon Says analogy for the bike shop - puts it allll into perspective!! Your dedication and devotion to your husband and his passion never cease to amaze and inspire me! For that, and for SO much more, you are one incredible person!! Same for your dedication and devotion to your sweet little ones - all the little things your do with, and do for them will always remind them of how much they are loved by their Auntie C!! The monthly birthday tradition is just one of those things and they are going to LOVE these. Adorable and full of special auntie love!!!

Sweet, sweet cards for Little Miss T and Little Mr C, Carol ... they'll love them to bits ... kinda like they do you! I'm thinking you're already a 5* auntie to both these sweeties, with or without Lightning McQueen or Spiderman! Anita :)

Your kidlets - Miss T and Mr C are so lucky to have you for an aunt and each of these cards made me smile!! And when they see these they will smile BIG and hug the stuffing out of you next time they see you!! I am so impressed with all that you do and your total dedication to those you love!! You, my dear friend, are and excell-er!!! I love seeing all the ways you shine and share your love and talents with others!! Have a rocking day!!! Hugs to you - Taunya

I hope the race went ok!! Your cards are lovely!! The first one isn;t busy, but perfect, i love the colors!!! And the little helicopters are so cute!!

Two fun cards showcased here! I love the fun, "busy" as you called it speech bubbles - perfect for a little girl. The other one with the helicopter is really fun too. I love the colors on that one!