A 'Well, I Tried" Mini...TIME OUT Challenge #12 CASE With Your Own Twist

Happy Wednesday!   Today marks the 'official' start to the school year for teachers and staff, beginning with coffee and muffins (yum...) at 9am, followed by....meetings.  Tomorrow, meetings. Friday is a day off, as is Monday.  After four days of this, I'll be more than ready for an extra long weekend.   Sheesh, I am so out of work-shape!!

Okay, so after 963 attempts to case the amazingly talented Anita's card featured at TIME OUT Challenge #12, 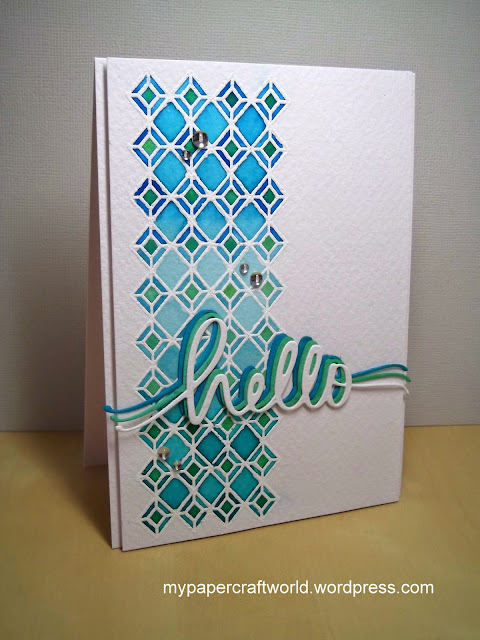 I came 'this close' to giving up.  So many elements to choose from, but...water-colouring was a no go; stenciling was an epic fail; embossing taxed my inability to stamp straight. I pretty much tried something every day since the challenge opened and egads! Nothing "fruitified" (that's one of my mom's words...she meant 'fruition' in the context of the conversaton but I think fruitified is excellent!).

So, with things in card-land not going well, I took a little step back to re-think my perspective. I considered not joining the challenge, but that lasted all of a fleeting thought. Instead, I went  into 'default' mode: mini cards! Yayyy for minis! Then I remember a NBUS Fri-die that I have fro CAS_ual Fridays, so I die cut the insert three times, gave them some 'ombre' inking, added a hello sentiment and...done.

Far cry from what I was aiming to do (by a long shot), but I still wanted to play because I think Anita is AWESOME x AMAZING!! 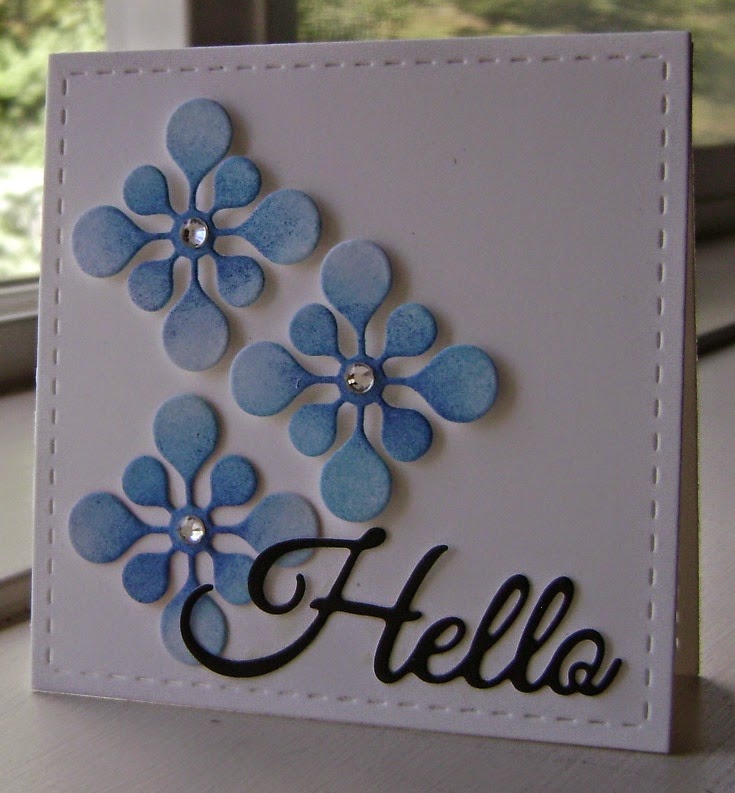 Of course, now that I'm posting this at the last minute, a whole slew of new ideas have pinged...Isn't that the case!

so pleased you didn't give up Carol and sneaked in at the last minute! And you did a fab CASE of Anita's card. The dies look great and such a good idea to give them the onbre look. You know we love to see you at TIME OUT Challenges and better late than never my friend! x

What do you mean? This is a fabulous take on Anita's card!
Wishing you a great start of the new school year!

Oh, I'm so pleased that your not-joining-the-challenge moment was a fleeting one, Carol ... and that you made one of your simply splendid mini cards! Love those ombré die cuts ... perfect with the bling centres and the bold sentiment! Thanks so much for the lovely shout out, my friend, for playing along at Time Out, and for such an amazing CASE! Hugs, Anita :)

BTW I love your Mom's 'fruitified' ... it just captures the feeling so beautifully!

Beautiful Mini card!! Love what you did to create an ombre effect on the die cuts!! Simply fascinating and so cool looking!! I love mini cards too, since you always need one to tuck in with a treat or a gift!! I made 5 little mini cards today to say thanks with some mini chocolates to some members of a card club I am in!! I hope they will like them!! The chocolate is a shoo-in but the cards might be iffy - I put them together in a rush! Did not even photograph these ones since they replicate one I posted way earlier to my blog - like last May (2013)!! I love to read your blog and your comments - so sunny and motivating! Have a really awesome night before another day of work tomorrow!!

I'm so glad you 'stuck with it', because your card turned out beautifully, Carol! I love the ombre effect on the Fri-Die and your bold die cut sentiment is perfect!
Thank you so much for stopping by my blog...it was so nice of you to let me know how much my comments meant to you, and I also appreciate your kind words...Thanks!

If you hadn't said you almost gave up I would have never known. This card is excellent. Goodness I hope you trudge on more. Not that I want you to be stressed more, just want to see more of this. Never give up. - Jim

This is darling. Yeah for along weekend to relax and get back into the work mode. Always a hard start after the summer. I can no longer stay up late reading or I pay dearly the next day LOL!

I'm glad you persisted, Carol, as this is such a pretty card. You rock the mini card! :)

This is an amazing design. I love how you've been inspired by Anita's gorgeous card ... but you made it totally your own. Very creative! Loll xx

Hey, C, I found a beautiful butterfly card and it totally made me think of you - the scattering of butterflies across the middle represent to me the many beautiful, sweet, endearing comments you have made on my blog - Your most recent one caused tears of joy and validation!! You are amazing and the other butterflies on the card represent the friends we are. Hope you love it as much as I think you will!! Enjoy and have the loveliest day!!!
Link - http://www.scrapbooking247.com/yellow-butterfly/

I think Anita is amazing too Carol and I think your amazing. Your "mini" card turned out great!! I love that die you used and your inking is perfect. I think you did a great job at playing with this challenge! Sometimes it just takes some stepping back and getting focused all over again to come up with something fabulous. And of course after it is all done, then we can think of a million other things we could have done. lol I hate when that happens and yes, it happened to all of us even those of us who aren't all that good at it. lol Hugs, Brenda

So glad you persisted, Carol! Love those flowers and your entire take on the inspiration! Beautifully CAS!

I don't think I could ever get enough of your minis!! This one is so clean and sleek. Your sponging, again, just has me saying wow over and over again! The sentiment is bold, beautiful and perfect. Another jaw dropper!

This is such a creative way to used the dies :)

love the sponging on that DIES dear Carol and the simplicity on your card I love your style did I told you already...always clean and it looks calm down and made me want to have your card..I know its expensive to send from outside germany...one day if you give me your address I will send you a birthday card if you allowed me Carol....I wish I can visiting you one day and we can making cards together, do you like that Idea...hugs, Monika

At least you didn't give up!! Because what you ended up wth is fantastic!!! Love the blue dies popped up!! And of course nothing better then a mini card!!