So, a certain Aunty C, has a certain niece, Ms. T, who is turning 55 Months Old today (she's nearly 5...gahhh!! I've told her to stop. growing. up. so. fast!) which calls for a Happy 55 Months Old card (Mr. C turns 31 months old next week...ideas for his card are percolating).  Ms. T has a 'thing' for fairies of late; last visit we watched Tinkerbell and The Pirate Fairies, where I learned the 'history' behind all the characters from Peter Pan.  Good thing, too; I mean, all these years of not knowing Hook's background, or why the alligator tick-tocked, or if poor Tinkerbell was a solitary species has kept me awake at nights!  Thankfully, the movie saw my questions resolved, worries calmed. Combine my new insights with having the kiddos cuddled on my lap for the movie's duration...ahhhhh...Too wonderful for words! Anyway, back to the fairies...

When I went shopping (pre-movie watching) - again - at the same place as before (yes...another no exercise restraint enterprise) a sweet fairy die entered my range of vision. I did what any good Aunty C would do... 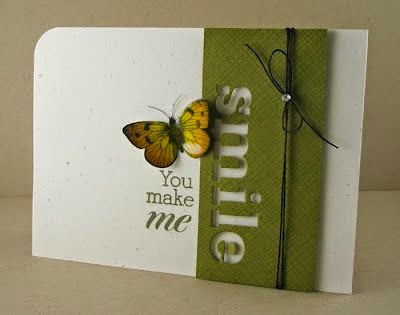 I'm also linking to The Pink Elephant #270~Anything Goes

Both will be in the mail for my sweet Ms. T tomorrow - and I'll let her decide which card she wants to keep and which one she might like to give to one of her friends or teachers (or maybe her brother, Mr. C...it might keep things 'peaceful').  After making the first, I realized I'd forgotten to stamp part of a sentiment to join the 'love.' Ooops. 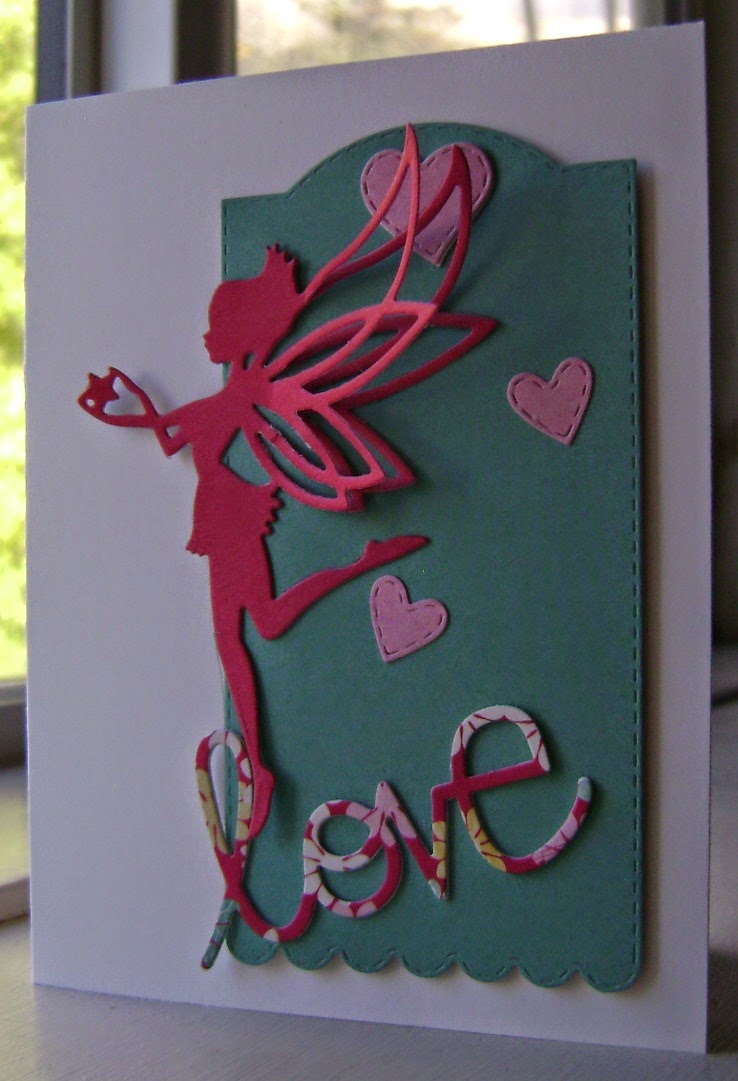 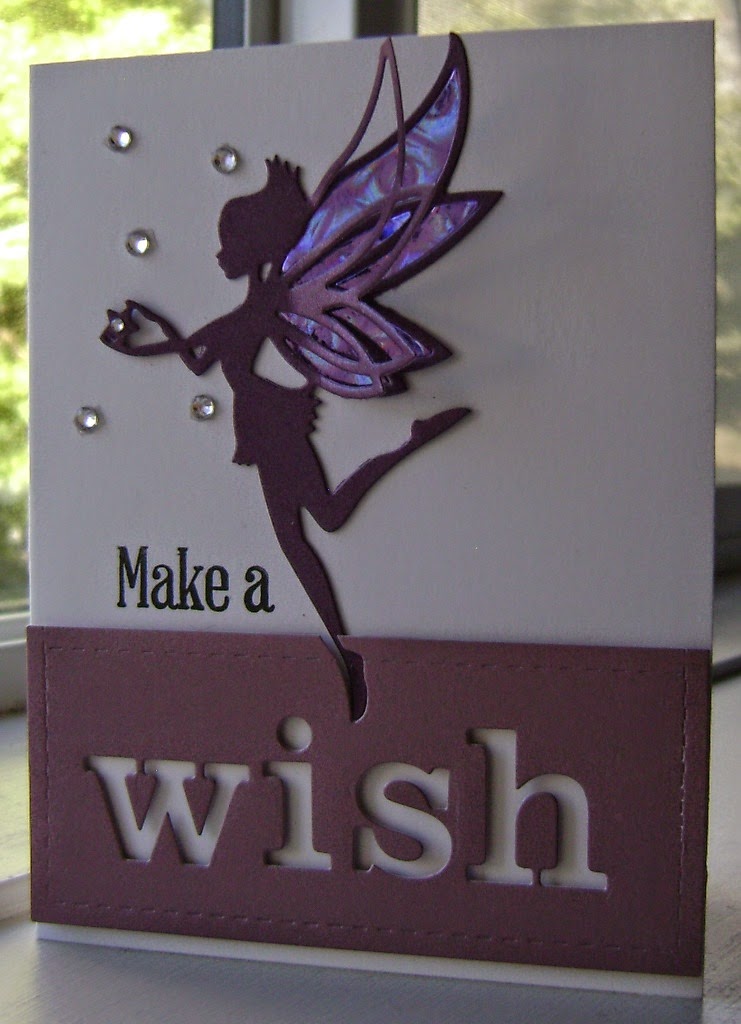 Obviously, a second 'had' to be made (everything was out anyway), except this time, in addition to cutting out the fairy twice (wing ''fluttery-ness") I also cut the wings using hologram paper for the insets, to add some 'pizzazz'. A sprinkling of sparkles (another thing Ms. T quite favours), and ta-dahhh...

Hope she likes them, as I have plenty more plans for this sweet fairy die.


Thanks so much for dropping by; your visit and comments add sparkle to my day!
Posted by cm at 11:49 AM

WOW yet again! Seriously, I never would have looked twice at a fairy die...unless I had some very special young lady in mind! Miss T is going to be beyond ga-ga over these cards. I'm thinking that neither one of them will make it into some other little girl's hands! The fluttery, hologram wings - brilliant! You've also designed the cards perfectly in that the background elements don't steal any attention away from the fairy die!

wow woow wooooowwww what should I say...I LOVEEEE the second card it is totally ADORABLE miss C...I looovee itttt and I think this is the winner..please tell me if I am wrong guessing okay sweety...love the first card too..both so lovely...

Awww, I bet having those cutie pies cuddle up in your lap watching the movie was awesome Carol! I know my one granddaughter will come get me to cuddle in bed to watch a movie on my Kindle and I just love it! Your little fairy die is fabulous! I've never seen a cute fairy die like this. Both of your card couldn't be any cuter and I love your take on the inspiration photo. I think Ms T will adore them both! Hugs, Brenda

That fairy die is adorable! And what you did with it is totally stunning! Love those hologram wings! Miss T will adore them so much! Doubt she will be able to part with one of them, I know, I couldn't!

The butterfly is so pretty Carol a fav sentiment and love how you die cut the smile! LOVE the fairy die so much Carol, such sweet designs and Ms. T will love them and may want to keep them, I know i would!

My goodness Carol, these Fairy cards are just amazing, I love them and want them! Wonderful colours and the wings...sigh!!

Oh you are making it tough on her having to decide! Bet she keeps all of them :)

Haha! I loved reading all about your learning adventure with Peter Pan! I went through that same thing not too long ago when my kids were little! Who knew! Your cards are absolutely adorable! That little fairy die is too cute! Love her wings! I imagine Miss T is going to want to keep both of those. Well, I would if I were her :D Who says you can't have two birthday cards??? Happy card making cay my friend! Stay warm up there! ((Hugs))

Love them both. Great fairy die!! I do miss seeing all the kid movies! MUST watch Frozen as I know the names of all the characters from kids and know there will be a million Elsa's for Halloween LOL!

These are so pretty! Thanks for joining us st CAS on Sunday!

These are both so sweet, Carol ... the pink fairy with floral love is pretty, pretty, pretty ... and the purple one with those holographic wings and shimmery gems is just magical! Miss T will want to keep them both! Hugs, Anita :)

I swear your creations just keep getting lovelier and lovelier!! These are done perfectly with just the right focus on the fairies and a great eye for details!! Your little Miss T will not be able to decide which one is her favorite - I can't!! They are both an incredible show of your love to her and the pleasure and joy you get from being Aunty C!! I hope to be more like you when I grow up and I really want to be as good a Nana as you are an Aunty!! Thank you for your dedication to life and enjoying every moment - even if you feel like you are rushing through those moments!! :) You can pat yourself on the back for the true cuteness you have created here!!! Love and hugs to you!!!

Oh my goodness, Carol--these are so sweet! Can just imagine you & the kiddos watching the movie together--precious times that are over too fast!

Your love for your niece and nephew is truly delightful to read about. Both cards are so darling! You find the most amazing dies and work wonders with them!

Your family is truly lucky to have you and your nephew and your niece are getting spoiled rotten by your cards :-) I mean, could these fairies be any lovelier? And the way you diecut the foot of one of the fairies into the colored card stock on the second card – oh my goodness! That little detail alone is simply amazing. I just love discovering all these little elements on your card, they make them super special.

Very pretty. Thanks for joining us over at CAS on sunday.

Oh shocker, I'm late again!! Grrrrr!!! But I just had to pop in to say Happy Thanksgiving to my bloggie bestie!!! And of course to your sweet hubs and the whole family too!! And while we are on the Happy's, happy very belated monthly birthday to the sweet Miss T!! And by now, to Mr. C as well! Oh I adorrrrrre the fairy die and loved it even more so knowing that was very specially selected! So delicate and girly but it packs a lot of punch too on both cards. Hmmm, my bet is that Miss T kept them both ;) !!!